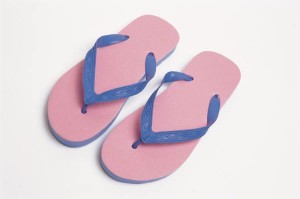 If the shoe fits!

Recently I was travelling on a fairly crowded train.   I was bundled in my seat – without a table so my papers and pens were placed precariously on my lap – my intention was to use this journey time on admin catch-up.

My carriage viewing range was somewhat restricted – in the main blocked by the backs of seats directly in front of me.  However, I did have the relief of a window and a limited diagonal side view to distract me from my work!

As one does on packed tubes and trains, I found myself occasionally people watching.  They came and went and some shared their mobile phone conversations with fellow travellers in the carriage!  After such distractions I eventually settled down to concentrate on my paperwork.

A few stops before my final destination, I happened to look up and noticed an attractive young woman chatting away to people opposite her.

After a while she herself settled down to read a newspaper.  Although my gaze focussed on her face my brain was busy at work mulling over the contents of my documents.

For some reason my stare absent-mindedly flowed down to her feet – which kicked my brain back to sudden reality!  What very strange feet, I thought.  Curious! They don’t look like they fit her face!

I double checked: emerging from beneath the newspaper on her lap her legs were crossed and rocked gently with the motion of the train.  She was wearing flip flops so her toes were completely exposed inviting me to discreetly ponder them further!

She had long slender feet – rather the ‘Princess’ type (as featured in Jane’s book Let’s Read Our Feet) although on consideration they were a bit on the large size and somewhat knobbly for a princess!  She was a tall girl though, so ok and princesses can’t all be perfect!

I noticed, too, that there were fairly even spaces between each of her slim toes; the toes themselves appearing ‘squeezed’ in places and particularly knobbly at the joints.  Incongruous!  Her feet puzzled me and I started to reflect what Jane Sheehan might have to say about them.

Fascinating as this was, the announcement came over loud and clear that my station  was next.  Quick.  Pack up everything. As I stood up to gather my belongings together I spied a man – his head slumped low on the attractive female passenger whom I was observing.  Oh! Before, I stood up he’d been completely hidden from view. Now I discovered that it was his knees, not hers, emerging from under the newspaper  and – you guessed it – it wasn’t her feet that had captivated my attention, but his!   Hooray! Now the feet looked like they actually belonged to the right owner!   “If the shoe fits” came to mind as I got off the train and I couldn’t help but see the funny side of this little scene.

This website uses cookies to improve your experience while you navigate through the website. Out of these, the cookies that are categorized as necessary are stored on your browser as they are essential for the working of basic functionalities of the website. We also use third-party cookies that help us analyze and understand how you use this website. These cookies will be stored in your browser only with your consent. You also have the option to opt-out of these cookies. But opting out of some of these cookies may affect your browsing experience.
Necessary Always Enabled
Necessary cookies are absolutely essential for the website to function properly. This category only includes cookies that ensures basic functionalities and security features of the website. These cookies do not store any personal information.
Non-necessary
Any cookies that may not be particularly necessary for the website to function and is used specifically to collect user personal data via analytics, ads, other embedded contents are termed as non-necessary cookies. It is mandatory to procure user consent prior to running these cookies on your website.
SAVE & ACCEPT

This function has been disabled for Reflexology Plus Therapies.